In this talk, some tensions and inconsistencies within the historiography of ‘modern’ masculinity will be addressed. Although it is generally acknowledged that the power of masculinity resides mainly in its ‘unmarked’ position (masculinity as unspoken, implicit norm), gender historians tend to focus in their empirical research on explicit and ‘spectacular’ expressions of masculinity (e.g. sports, army), and therefore also on a limited number of historical ‘moments’ (such as Revolutions, war, fascism). In my new book project, I am trying to study the mechanisms of ‘unmarking’ at work in the history of Western masculinities, roughly between the end of the eighteenth century and the beginning of the twenty-first. I will illustrate the general framework of my work with examples of how the rise of Romanticism and Liberalism in France and England in the first half of the nineteenth century required a backlash against the male nude in the mainstream visual culture (as well as a promotion of the female nude).

Henk de Smaele is Professor of History at the University of Antwerp and currently Visiting Research Fellow at the Birkbeck Institute for Social Research, University of London. His work focuses on the history of gender and sexuality, as well as on the relations between ‘Europe’ and the ‘Middle-East’ in the 19th and 20th centuries. Apart from articles in journals like Gender and History and Journal of Women’s History, he recently published (with Tine Van Osselaer en Kaat Wils) Sign or Symptom? Exceptional Corporeal Phenomena in Religion and Medicine in the 19th and 20th centuries (Leuven University Press, 2017) and (with Houssine Alloul and Edhem Eldem) To Kill a Sultan: A Transnational History of the Attempt on Sultan Abdülhamid II (1905) (Palgrave Macmillan, 2017). He is also co-chair of the Belgian Archive for Women’s History (Brussels). 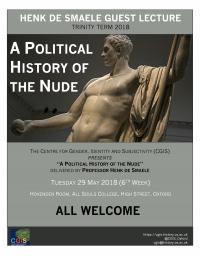